Visit Rome: Drink In The History and Beauty of Italy's Capital - GeekyTravel.com
Skip to content 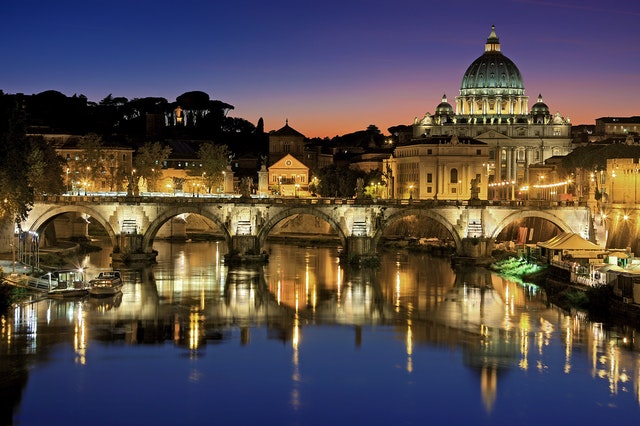 The Italian city of Rome has the perfect combination of historic beauty and modern attractions. Rome has stood as a city of grandeur for over 3,000 years and much of its cultural and historical spectacles still remain. Nestled between the modern cafés and unique boutiques you will discover ancient ruins and explore the same paths that have been trodden by hundreds of generations. With an air of theatrics and a guaranteed lively atmosphere, Rome has come a long way to keep up with its modern counterparts whilst preserving its great legacy.

As a city of religion and culture, Rome has everything the eager traveler could need. The fountains that take pride of place among the bustling streets remain as majestic and beautiful as when they were first built, and while they no longer provide drinking water they do decorate the piazzas beautifully. Spectacular displays of Italian architecture covering thousands of years can be seen throughout the city, from classical ruins to preserved examples of the Roman Empire.

As the capital city of Italy, Rome is situated ideally and can be reached through numerous methods links.

Rome has two major train stations; the Termini Station (located in central Rome) and the Tiburtina Station (located a short distance from central Rome). The Termini train Station is an ideal station for which to explore Rome, and many European and Italian railways have regular trains to the station. There is a great selection of local links running from the station for easy exploration of Rome and the surrounding areas.

If you are travelling from a European country then the 11 hour Thello Night Train from Paris to the Termini Station is one of the most popular routes. Taking the high speed train, you board in Paris and swap trains in Milan before ultimately heading to Rome. You can reach the Paris Gare Lyon station to board the train to Rome from most nearby countries with ease; there is also a direct train from London that takes around 2 and a half hours.

Flying to Rome is one of the most popular options, especially when visiting from a non-European country. There are two working airports in Rome that cater to both premium and budget travel. The main airport, Fiumicino (Leonardo de Vinci) Airport, is located 16 miles from central Rome and generally costs the most. The airport services many countries worldwide and you can fly from most major airports within the UK; including Birmingham, London and Leeds. From the airport you can get into central Rome with little trouble; car rental is available (budget cars and luxury options) and public transport can take you into the city for a few euros. Taxis are available for around 40 euros.

Ciampino Airport is considerably closer to central Rome and the Termini station, but not as many flights go to or from the airport. You can get flights from some countries and a limited option within the UK; flights go from airports such as Bristol and Gatwick. Travelling to Ciampino Airport can be substantially cheaper, despite its location. Many of the transport links available into central Rome are the same as from Fiumicino Airport but for a lower price. Taxis are generally 10 euros cheaper.

Italy is surrounded by the Adriatic, Ligurian, Ionian and Tyrrhenian seas, making transport by boat into Rome possible with relative ease. The main port that services Rome is the Civitavecchia Port which, despite being around 50 miles away, has excellent transport links into the city. Trains regularly travel into the city (usually two an hour) and each of the 6 train stations in Rome have trains that link to the Civitavecchia Port. A journey will normally take upwards of an hour when travelling from the port although it is possible to catch a faster train.

Cruise ships stop at the Civitavecchia Port for visits to Rome and you will find a good shuttle service that works around the port, making it easier to board and leave the ships. Transport to and from the port won’t cost much, and a day trip into Rome can cost less than 10 euros for transport.

Seeing Rome by foot is arguably the best way to enjoy the busy city and explore the historic sites. A walk from the breath-taking Colosseum to the culturally rich Vatican City will take less than an hour at a pace that affords plenty of sightseeing. If you want to get around a little faster then renting a bike will only set you back around 4 euros an hour and means that you aren’t restricted to the popular tourist spots.

Taxis are easy to come by in Rome and they can get you were you need to go in good time. While there may still be a degree of walking, hiring a taxi will ensure you end up where you want to be. Taxis aren’t cheap in Rome and you’ll likely spend around 10 euros on a quick trip and considerably more if you use the service during peak times.

Public transport is excellent for getting to and around Rome. The Termini station has great links to the Vatican and other popular tourist locations and the tickets won’t set you back more than a few Euros. The bus service in Rome is ideal for exploring the entire city and again the prices are very reasonable — you can get a 100 minute pass for 1.5 euros. Most of the public transport available in Rome is run by ATAC, including the trams, buses and metro. A number of deals are available for short stays and longer visits; for 28 euros you can get unlimited bus travel around Rome for 48 hours from the purchase of your ticket.

You can rent a car from the Fiumicino and Ciampino airports for varying prices, usually starting from around 12 euros a day. There are also a number of rental places within the city where you can book in advance or hire on the day (only some places). Rome isn’t the easiest city to drive in, particular for those who aren’t used to during in busy capitals. It is likely that with the busy nature of the city and the excellent public transport a rental car will be left back at the hotel. However, if you’re thinking of traveling around Italy as well as staying in Rome then a car will be quicker in comparison to some of the other transport options.

What To Do In Rome

There are endless options for any traveler. The Colosseum is a must for most visitors; you can buy your tickets from Valentine Hill for as little as 12 euros and there are multiple transport links from the Termini train station and nearby bus station. 8 euros will get you a tour of one of the five catacombs in Rome, the St Callistus catacomb in the south can be reached easily from almost anywhere in Rome on the Metro. There are also a number of free attractions that you can visit and take a tour of including the enormous Pantheon and the Spanish Steps that lead to the Trinita dei Monti church.

When To Visit Rome

The city has a fair climate which means Rome stays warm most of the year. Surprisingly the summer months are among the quietest times to visit the city due to the intense heat, and the winter is also fairly unpopular with tourists. While Rome generally stays pretty busy all year round, religious holidays see an enormous push in tourism, especially around Vatican City. There are also a number of festivals during the year such as the Natale di Roma and the Festa de Noantri that attract a number of travelers to the city as well as locals.

The cost of flights to the Fiumicino or Ciampino Airports, as well as the rail costs to the major train stations, varies throughout the year. During the slower tourist periods you can get a flight to Rome from around 100 euros but this can increase considerably in busier times. Most of the attractions in Rome are open all year round; the Colosseum only shuts on New Year’s Day and Christmas day. Whatever time of the year you visit you won’t be stuck for something to do; Rome is a lively city that offers its visitors an unforgettable experience.