Visit Las Vegas: Be Seduced By The Neon Splendor - GeekyTravel.com
Skip to content 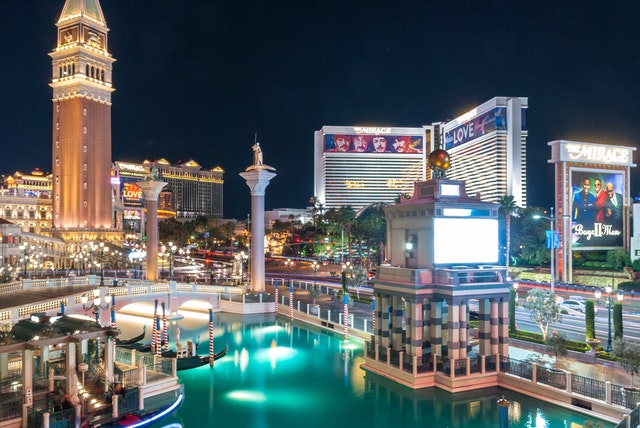 Located in the searing Nevada desert, Las Vegas is a piece of gambling paradise that rose out of the seemingly inhospitable soil to become one of the most popular tourist destinations in the world. This is a city for adults, for those looking to leave their 9-5s and their kids behind, and to live life to its fullest for a week or two.

Las Vegas is not an expensive city, but once it draws you in then you may not be able to leave until your credit cards have been maxed and your bank account has been emptied. Vegas wants your money, and after a few minutes under its dazzling spell, you’ll be happy to give it every penny that you have.

Time of Year to Visit

The time of year you visit depends on what you want to see and how much you want to spend. The weather is not really an issue here, particularly not if you plan on spending your time in the casinos. They are open, well-ventilated and air-conditioned spaces that make you forget you’re sitting in the middle of the desert. It also doesn’t get very cold in Las Vegas, so that won’t be much of an issue either.

If you go to Las Vegas between Thanksgiving and Christmas then you’ll probably get cheaper flights and hotels than at any other time, the city is also unlikely to be densely packed with tourists as it is for the rest of the year. Las Vegas is a beautiful city at night, and in the darker winter nights that will account for much of the day.

July and August is a good time and is one of the cheapest. If you don’t plan on spending too much time outside of the casinos — otherwise you’ll cook in the desert heat — then this could be the perfect season. The World Series of Poker also runs around this time, although the final table is usually towards the end of the year. The spring is probably the most popular and one of the most costly times to visit Las Vegas, the heat is just starting to get intense around then, but it is still bearable. This is when the Spring Breakers descend on the city, so be prepared for a mass of college-age kids. New Years is a very popular time as well, as you would expect, and prices can skyrocket accordingly.

This all depends on your budget, but Vegas has some of the cheapest five-star hotels in the world. The simple fact is that these resorts make their money from the money you spend on the tables and in the slots, so they are happy to reduce the prices of their rooms in order to get you through the doors.

For a list of some of the cheapest hotels in the city check out this Tripadvisor link, which lists some of the best deals around. A night in one of the top hotels will typically set you back between $150 and $300 dollars for a standard room, but there are expansive suites available if you truly want to holiday in style. The Venetian is one of the best hotels around and embodies everything that makes Vegas great. It is narcissistic, tacky and magnificent all at the same time. Where else in the world can you stay in a hotel where the foyer replicates the canals of Venice? (other than the Venetian in Macau, that is).

There are cheaper hotels and even bed and breakfasts off the beaten track, but some areas of Las Vegas are not as tourist friendly as others, so caution is advised when venturing away from the Strip. If you are looking for a cheap alternative then there are some big self-catering apartment blocks, including a three-star one run by the Hilton.

The Venetian Resort and Casino as seen from outside.
A view of The Venetian from the outside.

What to do in Vegas

1. Play Them All: This is the gambling capital of the world and there is an abundance of card games, table games and slot machines for you to play. If you live in the United States, in states where gambling is restricted, this opportunity probably doesn’t come around very often, so enjoy it while you can. The same applies regardless of where in the world you’re from. Las Vegas casinos are like no other and the experience of playing a hand or two of blackjack, joining a poker game, having a pull on a one-armed bandit or a spin on a roulette machine is an experience that shouldn’t be missed. It doesn’t matter if you don’t know the rules, that’s what the internet is for; take a few minutes to learn and to get to grips with the game and then sit down and play. Just make sure that you don’t ask too many questions when you’re at the table, the other players don’t want to hear it and the dealer isn’t there to give advice.

2. See the World: Some say Vegas is a city of tat, a narcissistic, overblown cauldron of all that is cheesy and wrong with capitalism, and they’re right, but this cheesiness should be embraced. Las Vegas is the only city in the wold where you can see the Eiffel Tower, the canals of Venice, the Statue of Liberty and the Empire State Building all within a few miles of each other. Most of these are located within the big hotels and casinos, so make sure you visit as many of these as you can and don’t restrict yourself to the resort where you’ll be spending the night.

3. Boozing in Style: Hit the streets of Las Vegas and pull up a stool at one of the many great bars. Yes the casinos also have their own bars and yes some of them will even serve you at the tables as you play, but Las Vegas is more than just casinos and gambling (albeit not very much more) so drink in some local ambiance at the nearest bar. There are a host of great cocktails bars, sports bars and more in Vegas, and they all welcome tourists on a regular basis.

4. Take a Tour: If you want to see all of the Strip in on go then jump onboard one of the sightseeing buses and reserve yourself a sat on the top deck. These buses often cost less than $10 and the ride can go on for two or three hours, taking in all of the main sights of the Las vegas Strip and some of the Downtown area as well. This is probably the best and cheapest way to see the city.

5. Get Married!: Las Vegas is renowned the world over for being the place where drunks and strangers get married in as little time and for as little money as possible. We’re not suggesting that you get drunk and marry a stranger (although it would make for some interesting holiday snaps) but if you and your partner are planning on tying the knot then what better place to do it than in Las Vegas? It’s tacky, but it’s also iconic and memorable.

6. Witness the Bizarre: There are plenty of bizarre things to see in Las Vegas, from theme clubs and parties to the GhostBar, which is suspended 55 floors above the city and comes alive at 11pm every night. Las Vegas is a city where anything goes and where the strange and the surreal is applauded.

7. Put the Cards to One Side: If you get tired of gambling, of the bright lights and the sounds of the Strip, then head to Rancho Drive. This is a natural haven not too far away from the hustle and bustle of the city, complete with botanical gardens and museums. The mass of foliage and greenery might be a shock to the senses after a prolonged stay on the Strip, but it can provide a welcome relief.

8. Eat: Las Vegas may not be renowned for serving the best food in the world, but with so much money and such a desire to please they do have some fantastic restaurants and some very skilled chefs. The views are also out of this world, particularly at The Top of the World restaurant. For some fine French, American and Spanish food try the Picasso; if Indian is your thing then Mint Indian Bistro or Origin India are worth checking out; for Chinese try the Wicked Spoon buffet and for some Middle Eastern flavours head for the Marrakech Moroccan Restaurant.

9. Shop: Las Vegas is a great place to shop, so if you get lucky as the casinos then head for the malls, casinos and stores to spend your winnings. Caesar’s Palace is one of the best places to splurge in the city and is also a must-see attraction whilst you’re there, so kill two birds with one stone and shop till you drop.

10. See a Show: Vegas isn’t just about gambling, and there is some great entertainment to be found here. Vegas is the home of variety performances, musicians and outlandish acts. This is where the magical comedy duo Penn and Teller made their name, and it is also where Siegfried and Roy strutted their stuff. The stages at Vegas are an assembly line of quality performances and skilled performers, so be sure to catch at least one show whilst you’re in town.

11. See a Water Show: Finally, a trip to Vegas isn’t compete without seeing one of the fountains. The jumping fountain is one of Hollywood’s favourite parts of Vegas and you’re sure to recognise it from a number of blockbuster films. It is located outside the Bellagio resort.