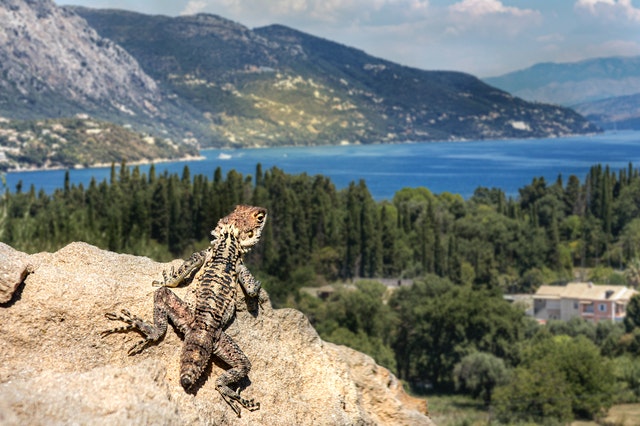 The city of castles, Corfu, is an island paradise separated from mainland Greece by the Ionian Sea. Surrounded by stretches of golden sun-drenched beaches and spectacular rock formations, Corfu is a popular and sought-after tourist destination. The island plays an important part in the mythological history of the Greek Empire and has a romantic connection to the Greek gods. Corfu has played a significant role in the development of Greece, from its days as a thriving kingdom of knowledge to its modern role as a major player in Europe. The influences of the ancient times are still present on the shores of Corfu as well as the castles that protected it during the 17th century.

Corfu’s current appeal is significantly different to its original battle ready structures and historic and cultural attractions. Corfu is now among the most popular destinations for young party goers looking for cheap drinks, loud music and hot weather. Parts of the beautiful island have been transformed into a different type of paradise, one for the younger market looking for a holiday they will never forget. The summer months see the island flooded with foreign visitors looking for the fun, excitement and noise of Kavos. Known for its all-night summer clubs, exclusive party boats and cheap accommodation, Corfu gains much of its revenue from its young visitors during the peak season. Away from the noise and bustle of Kavos, the original Greek culture can still be seen thriving in the beautiful and peaceful settlements within the island city. Benefiting from the tropical rain showers and fertile soil, much of the island is abundant with greenery and olive groves.

Thanks to the popularity of Corfu as a tourist destination it is relatively easy to get to and from the island, especially within the summer months. Travel to Corfu is fairly inexpensive and there are multiple options if traveling from a nearby European country or from other parts of Greece.

Corfu has one airport, The Ioannis Kapodistrias Airport, which services the entire island and is the most popular method of travel to Corfu. Located a short distance south of Corfu Town, the airport operates all year round. Flights are limited out of the main tourist season with only two airlines that have flights all year round into Corfu; Aegean Airlines and Olympic Air. From early summer to around October, flights into Corfu are easy to come by with many budget and luxury airlines running regular flights to the island, usually during the early week days and weekend. Package holiday flights are the normal during the summer months as the main trade in Corfu during this time is with package party holidays. Flights to Corfu can cost less than 100 Euros with some budget airlines, this price can change between seasons and flights into Corfu in the off-seasons can be considerably more expensive.

Upon arrival at the Ioannis Kapodistrias Airport there is a good selection of transport available to get into the main areas of Corfu or to selected accommodation. Taxis operate outside the airport and can be booked in advance, these will take you anywhere in Corfu for a reasonable price — from the airport into the city it is likely to cost around 20 Euros depending on the size of the party. Shuttle services and car hire are also available in the airport.

By Train and Ferry

While there are no trains that run into Corfu there are options available for train travel to Italy where a ferry can be boarded to reach the main Corfu boat port, New Port. An InterRail train ticket allows almost unlimited travel within Europe, depending on the type of ticket you hold. Some tickets will have discounted or free access for the ferry to Corfu. For travel from a European country the ticket is a budget option for most travelers, the prices for an InterRail ticket start at $31 for a few days of travel. There are also ferries from mainland Greece and Albania into Corfu on a regular basis. Boats from Greece can take as little as 95 minutes to cross over to Corfu and cost around 15 euros for the trip. Car rental, public transport and taxis are all available from New Port; some require booking in advance whilst others you can book on the day.

If you’re looking to explore Corfu then it is likely that at some point during your stay you will have to find a form of transport. Many of the places in Corfu are rural towns and villages and it isn’t feasible to explore far on foot. Electric bikes are easily rented in Corfu Town and other locations on the island to provide a quick and cheap way to get from one village to the next, they cost upwards of 20 euros. Car rental options are also available at both the New Port and Ioannis Kapodistrias Airport.

Buses are the main form of public transport in Corfu and can take you to almost all parts of the island, from the main tourist areas to the more rural districts. Buses from the airport and port run regularly with a reasonable cost for tickets, generally around 1 euro each. You can also catch buses to the outer villages from New Port as well as the main tourist places like Kavos; these buses can be found a short distance from the port at the Green Bus Station.

The most central bus station is the Blue Bus Station found in San Rocco Square, Corfu Town. At the Corfu Town Station you can reach most of the island with relative speed; most buses run at least every hour but less popular destinations can have a few hours of waiting time between each bus.

Taxis and boats are the best forms of private transport in Corfu and are easy to hire. Main taxi rentals can be found in Corfu Town, by the ports and in many of the busy tourist and party spots. Taxis are more expensive than public transport but are generally quicker; expect to pay around 20 euros per 10km in a taxi. Boats provide regular tours around the island, for sightseeing and partying, and it is possible to hire a private boat for a slow trip around the beaches or a luxury cruise exploring the sites. There are multiple boat hire companies in Corfu that allow you to hire a boat for a number of days without the need for a trained driver.

What To Do In Corfu

There is a lot to do in Corfu away from the normal tourist hotspots of Corfu Town and Kavos. While Kavos has an array of night clubs, thrilling attractions and seasonal sports on offer, there are more rural and cultural locations a short distance away from the bustling city and resorts. For much of central Corfu, away from the coastline, the image is not dissimilar from when the British ruled the island in the 1800’s. The roads are still narrow country paths that lead to the peaceful settlements of the locals in Corfu. The small villages have a selection of local attractions, unique shops and beautiful surroundings of olive groves and untouched countryside.

The quieter areas of the island also have a huge selection of beachside paradises, almost unvisited in comparison to Kavos and the more popular destinations. The 17th century ruins of the infamous Corfu castles that stood to protect the island can still be seen around Corfu. A visit to the Kerkyra Town will reveal the two forts that were built hundreds of years ago to protect the town; Neo Frourio and Paleo Frourio can both be visited for around 3 euros per person. Hiking trails run between the villages for a more peaceful exploration of the island, with many of the popular monuments easily located with the use of a travel map which can be purchased from most stores around Corfu.

When To Visit Corfu

The temperature in Corfu averages around 17 degrees during the year with the summer climbing considerably higher. Corfu receives most of its tourism during the summer, from July onwards, when the weather is at its warmest. The island doesn’t receive many tourists during the rest of the year and most of the hotels shut down for the winter. While it is likely that you will find some guest houses and other accommodation there is less of a chance that you will run into the large crowds seen during the summer. Spring showers and late winter rain are another reason why Corfu normally shuts down during the off-seasons; rainfall during these tropical storms can reach incredible heights.