Visit Barbados: Soak Up Some Sun During The Bleak Winter - GeekyTravel.com
Skip to content 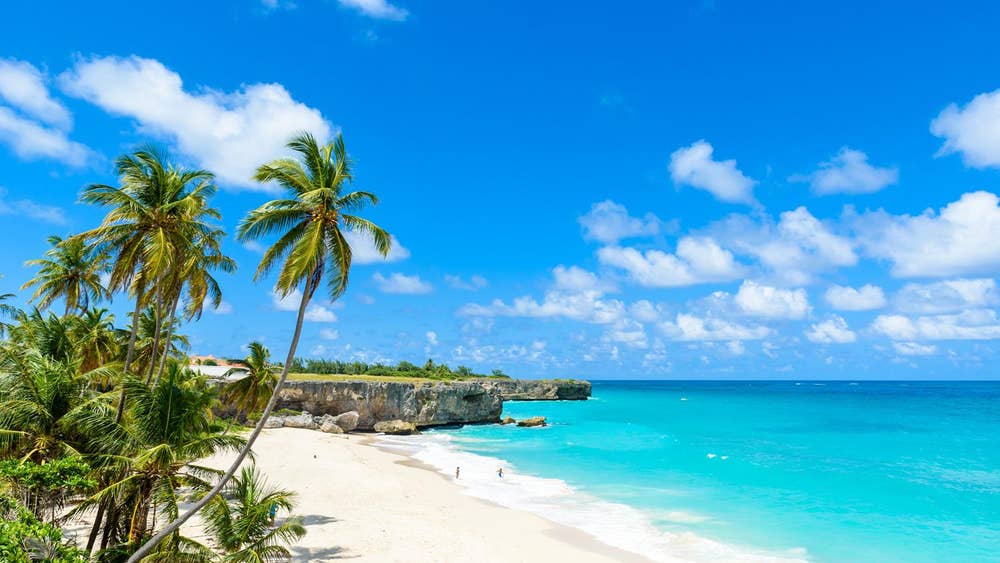 Sun, sea and good food — Barbados is a small island country and a hugely popular tourist destination for visitors worldwide. Barbados is classed as a Caribbean island and although it is surrounded by the Atlantic Ocean, it’s still known as one of the best Caribbean islands to visit. With warm weather, beautiful beaches and spectacular countryside, Barbados is visited all year round by people eager to enjoy the party life of the small island as well as its tranquil areas. There are many resorts and hotels lining the Barbados coast, offering a taste of England in the Caribbean surroundings. Due to the country’s close connections to England, having been a British colony for over 300 hundred years, it is a popular tourist spot for European travelers who want to experience a different country but like the safety of their own.

The beaches are pristine, with clear sparkling water and golden sand, a favorite for sun-bathers and those seeking warmth with a touch of familiarity. The countryside in Barbados, while shadowed by the popularity of the resorts, is something to be admired in its own right. Despite the country only being around 21 miles in length the beautiful green image of the rolling farmland and hilly terrain provides Barbados’ visitors with excellent hiking options and many local settlements to explore.

Barbados is the main travel hub for most of the Caribbean islands in the east and it acts as a link not only for exploration of the country itself but also for most of the surrounding islands.

Considering the size of the island the airport is spectacular and has been nominated for many awards for its excellence. The Grantley Adams International Airport is the only airport in Barbados and is located in Seawell on the South East side of Barbados near Bridgetown. The airport is the main source of travel in and out of Barbados, being the easiest and often the cheapest method to visit the island. A recent expansion means that the airport can easily deal with the heavy tourist traffic whilst providing many services to its visitors.

Many countries have daily flights to Barbados. In the UK especially it is not hard to come by a flight to the island. British Airways and Virgin Atlantic have regular flights to Barbados to cater for the amount of UK tourists that choose Barbados as their holiday destination. Flights from England generally take upwards of 8 hours, depending on which airport you travel from. It is possible to find flights with other airlines but many of the package holidays to Barbados use British Airways and Virgin Atlantic.

Car rental is available from the airport if you choose to drive around Barbados or there are taxis outside the airport that can take you the length of the island. Most package holidays provide their own transport, often in coaches, making it easier for customers to get to the holiday resorts.

The second option for travel into Barbados is by a designated cruise ship that ports at the Bridgetown Port in Barbados. Many cruise companies include Barbados in their Caribbean tours and it is a popular destination for ships from all over the world. Cruises generally stop in Barbados for a couple of days or for a single day visit and travel is arranged from the port to the popular tourist spots. There are also taxis and car hire options if you want to venture out by yourself or if you have arranged a longer stay. While a ferry service isn’t available to Barbados, it has been considered and ferries are still available to nearby islands, as well as helicopter services.

Transport around Barbados is easy to come by, the roads are in great condition and you can reach each side of the island in just over an hour, depending on how you’re travelling. Taxis are readily available from the port, airport or town and can be booked in advance or hired during your stay.

While Barbados is only 14 miles wide by 21 miles long. The road layout is particularly dense, meaning transport around the island is fairly easy. Buses have multiple routes between Speightstownn in the North West to Charnocks in the South, with stops in all the major towns and villages. In total there are three different types of bus transport on the island; two privately owned and one run by the government. The largest of the buses are owned and operated by the Barbados government. The government buses are all blue and cover the standard routes between Bridgetown and the outer regions although these can be the busiest. The two other bus companies have considerably smaller buses and can often get very busy during the peak tourist seasons as well. The ZR’s, known as route taxis, and the yellow mini buses have different routes but still cover most of the island. From Bridgetown you will be able to catch the route taxis, mini buses and blue buses to get close to your destination.

Barbados is a great country to drive around, the scenery is beautiful and every route you take is a little different. There are coastline roads and countryside routes available to explore all areas of the island. The roads are extensive for a small island, reflecting the dense population. Driving offers the freedom that public transport doesn’t and allows you to explore the island at your own pace. There are a few car rentals within the main areas of Barbados, Bridgetown especially. Car hire from the Grantley Adams International Airport will cost upwards of £30 a day but there are other car hire companies in Bridgetown and the surrounding towns to choose from.

What To Do In Barbados

Barbados is not short on attractions for the young and old; the island paradise is an ideal family holiday destination. Of course the main attraction of the island is its white beaches and stunning coastline, famed around the world for its beauty. The coast has an array of attractions over and above the initial draws of relaxation and sun-bathing. Snorkeling is a popular pastime and a fantastic introduction to the island’s sea life. There are a couple of companies along the coast that provide snorkeling trips and some package holidays also offer the option of including the experience in the total price. The once endangered Green Turtles that swim along the shoreline of Barbados are a popular draw to the island along with the many other sea creatures. There are also advanced scuba diving options, with or without submarines that cost around £60 a trip.

For a more land-based experience, the Barbados caverns reveal the beauty of the island away from the beaches and give you an experience that is not likely to be forgotten. Trams run underneath the island showing the natural caves that have formed over time. A tram tour of the underground caves at Harrison’s in Barbados costs £18.75 but there are cheaper options if you choose to explore on foot. Historic walks and monuments are another great feature of Barbados and can enlighten visitors to the true history of the island. The religious infrastructure in Bridgetown dates back as far as the 17th century; many examples of the cultural masterpieces can be toured and are still fully functioning. The synagogue, rebuilt and restored, is a popular destination in Bridgetown. Away from the main tourist attractions there are plenty of opportunities for shopping. Duty-free products are available on the island and each of the outer towns have unique souvenirs for sale.

When To Visit Barbados

Barbados changes considerably throughout the seasons, both in price and weather. The temperature never gets too cold, thanks to the ideal location in the Atlantic Ocean, which means the tourism doesn’t die off much over the year. However, there is a likelihood of storms during the late summer and early autumn months that make Barbados less popular and more peaceful. During these months the country is usually less crowded but there is the added risk of some of the best bars and attractions shutting down before the winter rush.

Many tourists choose winter to escape the cold from Northern Europe and head to Barbados to spend the holidays. These are the busiest and most expensive times to visit Barbados and almost all attractions, amities and transport will increase in price. To escape the winter tourist surge and avoid the storms, a visit early in the year is the best bet. While the weather is mildly cooler most of the attractions are still open and there are less holiday makers in the resorts and on the beaches.